XR Technology has begun to enter the public's field of vision. More and more scenes such as concerts, conferences, film shooting scenes, and TV shows have begun to use high-tech and realistic XR technology to realize more possibilities for creation. With the blessing of 5G, the popularization of extended reality XR technology is the general trend. It builds a virtual world and interacts with the real world to finally achieve the perfect integration of virtual and reality. 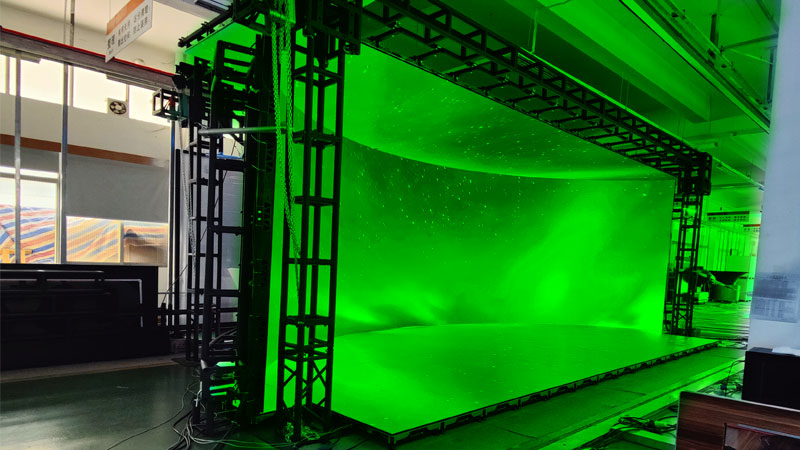 XR (Extended Reality) is a term used to describe an environment or interactive behavior that combines virtual and real elements.

At present, XR has become the mainstream of the virtual studio industry. In the industry description a few years ago, XR is more like a general description of AR and VR technology. It can be used to refer to an integrated system that includes the virtual and real world, and can even be equivalent to a specific motion capture technology, AR application, or VR games.

In the field of content production, it is specifically referred to as a workflow that includes an LED display, a camera tracking system, and a powerful graphics engine. It is a virtual production method that places performers in a virtual world in real-time without the need for a green screen and post-production process.

In combination with the BOLT Camera Robot, you can not only do stunning locations but also use the unreal movement of the camera for great shots.

Through the XR technology + LED screen, the actors are directly exposed to the "real scene", which greatly saves the cost of film and television production. This innovative production method can directly replace the traditional green screen and obtain higher value. It is becoming the film industry and LED The display industry is very concerned about it.

XR technology has also begun to enter the public's field of vision, and has been applied to more and more scenes such as concerts, press conferences, movie shooting scenes, and TV shows.

The rise of XR technology and the combination of LED screen have made virtual productions shine in the film and television production industry.

The reason why LED display screens are widely used in virtual production is not only because it is more compatible with XR technology, but also has a better boost to the performance of actors' acting skills and video post-production.

XR video production with LED display screen as the background, first of all, uses real-time rendering technology to restore the photo-level dynamic digital scene on the LED display screen, build the shooting scene, output the composite through the media server, and use the camera tracking system to locate the space and location Information, real-time mapping of the spatial relationship between the characters and the scene, real-time presentation and output of a virtual scene without blind spots, and in this real-time rendering of the shooting scene, actors can directly interact with the virtual and visible scene, this kind of physical reference Compared with the traditional performance without physical objects, the scene allows the actors to experience a more realistic sensory performance environment, allowing the actors to quickly enter the play.

In the traditional green-screen shooting environment, it often takes a lot of time to perform fine keying and repair the problem of color overflow. Compared with the traditional green screen, the LED display solves this problem. The shooting team can interact with the LED display in the created 3D environment. During this process, the shooting team can not only edit the content in real-time., It can also carry out precise tracking of pixels, and perform perspective correction on high-resolution rendered 3D images.

After the accurate camera tracking system is added, the camera begins to move around the seamlessly combined real and virtual elements in the LED environment. Let the audience watching through the camera's perspective produce the illusion of fusion and immersion; secondly, since the shooting scene is generated by the LED display, it supports importing conventional pictures, 360° panoramic pictures and videos, 3D models, and external camera signals into the studio to realize the scene Switching freely at any time, LED display stage technology and playback technology have greatly reduced the post-production time and difficulty for the visual special effects department, and the time cost and shooting cost of video production have also been greatly reduced; moreover, the LED stage combined with XR technology is in The highlights, reflections, and rebounds presented on the film reflective suits are more accurate.

Therefore, the use of LED display combined with XR technology for shooting can make the director directly feel the real-time images on the spot, shorten the workflow, and greatly reduce the workload of the later stage. While improving production efficiency, it can also create more magical scenes according to the director's needs. In addition, virtual production solves the cost of crew transportation and environmental waiting costs for location shooting. Simply put, the crew can produce and modify the required environment at any time without waiting for the rain or sunset. 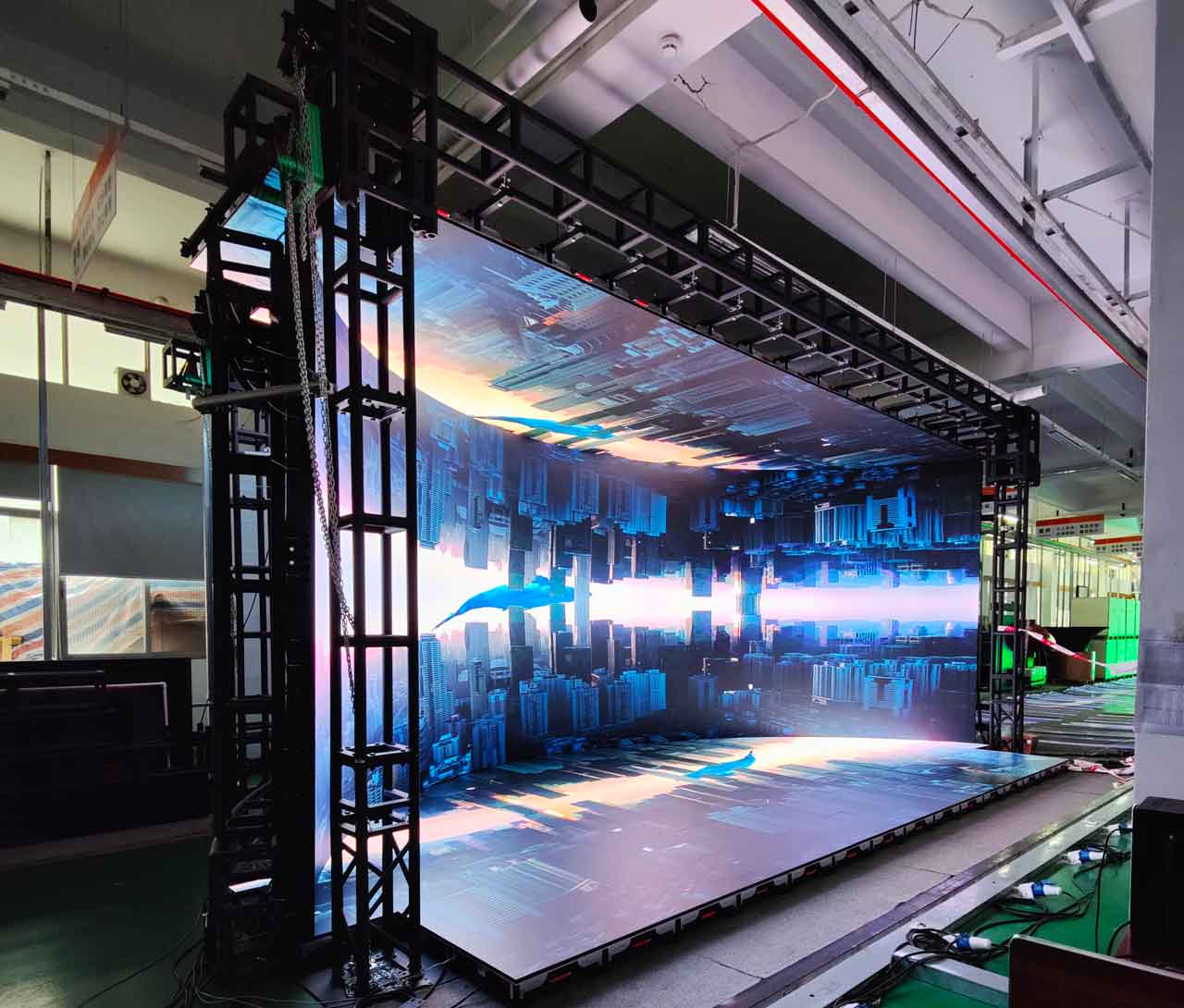 No need for complicated and expensive set designs. XR Virtual  LED display can be spliced into different shapes to meet the shooting needs. Virtual production background can be changed without limitation to save the cost of set transfer and long-time post-production.

Boundless creativity can be generated and presented on the XR Virtual  LED walls. By interfacing with the camera, LED walls can be virtually extended into a full virtual world even under a single environment.

Virtual environment is being generated on the server in real time. Tweaking is allowed on location to perfect the produced content. The shorten workflows streamline the post-production process and ease budget and time pressure.

XR Virtual Dynamic digital background is no doubt providing a more immersive environment to actors and actresses on set to perfect their performance than traditional green or blue screens.

How does XR technology integrate with LED screens?

Through high-quality LED display products, powerful media servers, and camera tracking systems, the display medium (LED/projection bowl screen) and the virtual scene outside the display medium can track the camera's perspective in real-time, and synthesize with the actual shooting picture in front of the camera lens. Create a sense of infinite space.

Using XR technology, the performance design team can cover the real world outside the LED live screen in real-time, and complete intuitive expansion processing. At the same time, the camera tracking uses MR mixed reality technology, so that the live camera in the live broadcast and the digital camera in the game is always consistent and synchronized. XR extended reality technology can provide high-quality virtual production services for film, TV, and event production.

What are the high requirements for LED display products in the application of XR technology in the film and television industry?

High contrast, high color reproduction, and low-brightness and high-gray technology enhance the sense of hierarchy and vividness, which can easily cope with the whole tracking and shooting of the camera. The captured image must display the details and information clearly.

When the camera is shot at various angles, the ultra-wide viewing angle ensures that the screen quality is not lost due to angle changes, maps the spatial relationship between the characters and the scene in real-time, and presents and outputs a virtual scene without blind spots in real-time.

The high refresh rate ensures that no reflected light spots including moiré appear on the screen surface.

Adapt to the brightness of different environments in the virtual studio site, and display better performance.

Ultra-low latency ensures that the playback content is displayed synchronously; the rapid switching of virtual scenes in the virtual studio requires real-time monitoring of the screen's operation on site, and realizes remote control of the content of the display in real-time, feedback problems in time, and proposes solutions.

To ensure normal shooting. At the same time, it is also necessary to ensure that any signal is switched synchronously to adapt to different virtual scenes and abundant signal sources.

What can XR technology bring to the film and television industry?

In virtual studio shooting, compared with the traditional green screen technology, the combination of XR extended reality technology and the display screen allows the director to directly experience the real-time images on the spot, shortening the workflow, greatly reducing the workload of the later stage, and increasing At the same time of production efficiency, it can create more magical scenes according to the director's needs, and realize the shooting of large scenes in a small space.

XR extended reality technology and LED display are mutually empowering, leading the innovative development of immersive technology and LED display, and will become the vane of virtual production in the film and television industry! With the rapid development of China's film industrialization process, XR extended reality technology, as the ultimate form of visual presentation in the future, will be popularized on the production line of the film industry just around the corner. 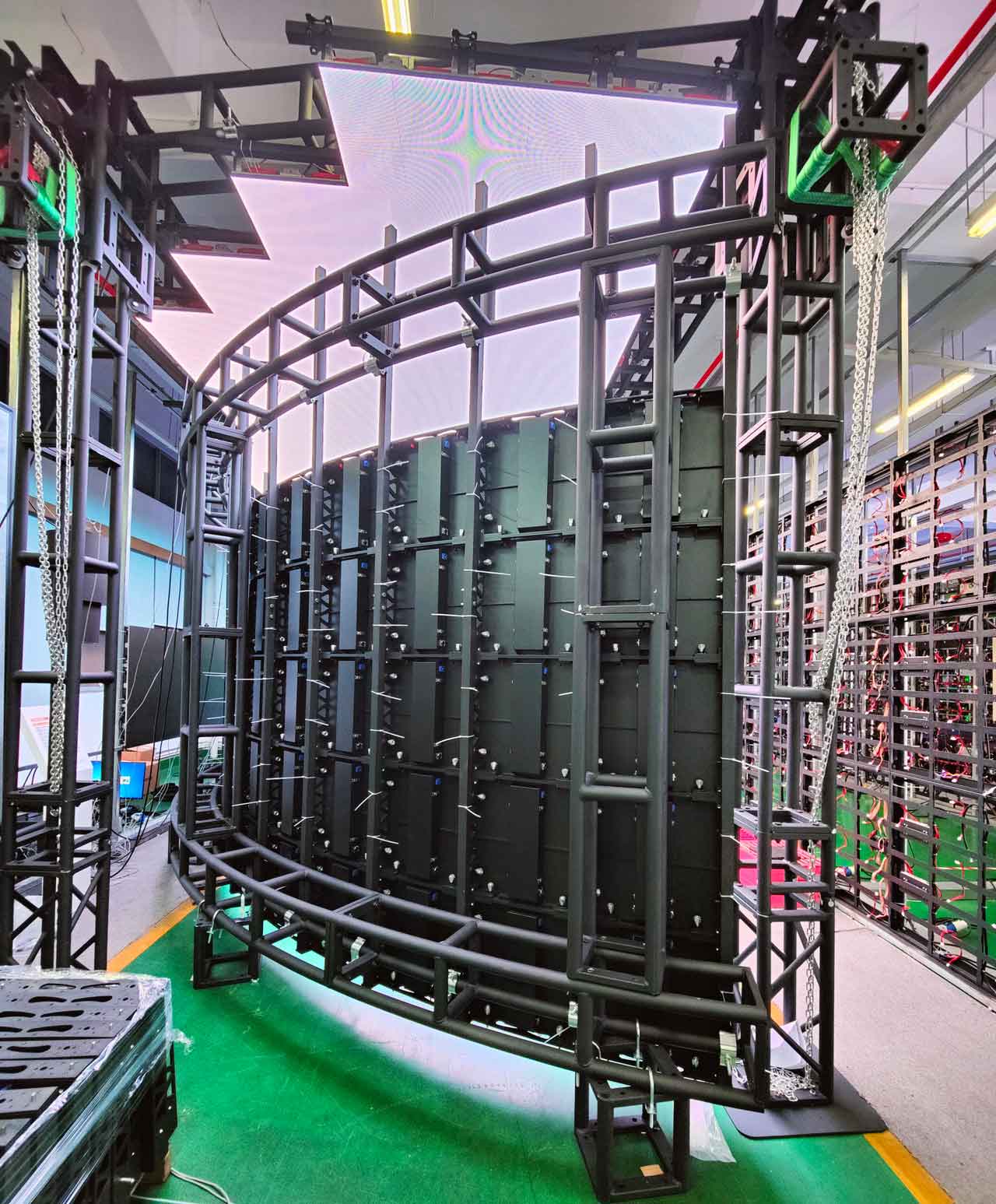 2. The floor tiles and the main LED screen bracket have the characteristics of fast, smooth, and safe construction.