How to Choose Synchronous and Asynchronous Led Display 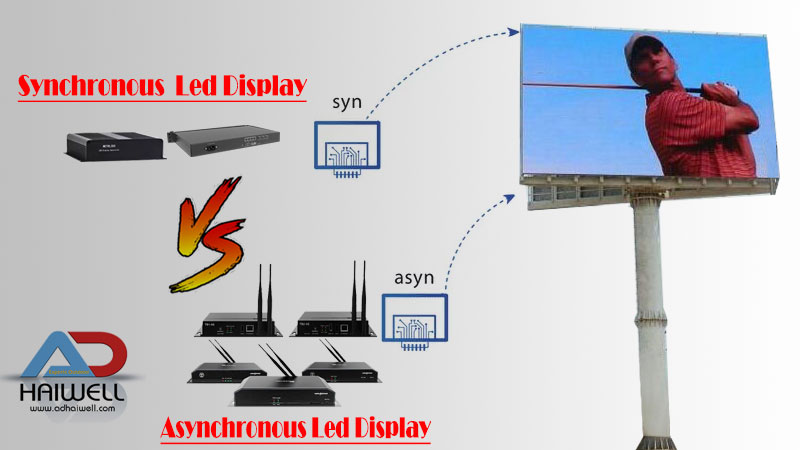 LED display control system is the core component of LED display, which is mainly responsible for receiving image and video information from computer serial port or DVI interface, and placing frame memory to display content, which is mainly divided into the synchronous system and asynchronous system. Let's make a comparative analysis of the two control systems.

Maybe it sounds great, these screens have their drawbacks. This is because you cannot work on these screens after the computer is turned off. Therefore, if the connected computer does not work properly or shuts down at any time, the screen will not display anything properly.

Now, for understanding well, let's discuss some of the features of synchronous LED displays.

These screens appear in the form of a 4K LED display or an indoor LED TV wall. Both monitors have space for computer graphics operations.

These types of LED displays are widely used as rental displays for various events (such as weddings, parties, concerts, LED displays, etc.).

They are built into large displays suitable for indoor and outdoor use.

You can find a lot of creativity and special designs on these LED screens.

LED display synchronous control system: mainly used for real-time display of video, pictures, text, notices and other information, mainly used for indoor or outdoor full-color LED display screen. The led display screen synchronous control system controls the working mode of the display screen, basically the same as the computer display. It maps the image on the computer monitor in real-time at an update rate of at least 60 frames per second. It usually has the ability to multi-grayscale color display, which can achieve the effect of multimedia advertising.

It is characterized by a real-time, strong expression, complex operation, high price, and the content on the computer monitor is displayed synchronously. Therefore, if the computer is powered off, the LED screen will not be displayed, so playback time will be limited. This system is mainly used in places with high real-time requirements.

The Asynchronous LED Display works the opposite of the previous screen. This just means that it does not display the same content as what is being played on the computer screen. In short, you can say that the graphic display of the screen was first edited on the computer. After that, it will be sent to the screen control received cards. Therefore, all the display information is saved on the screen and played directly, so there is no trouble even if the computer stops running or shuts down.

However, this also means that there are no real-time display capabilities or unlimited content options on these screens. Therefore, you must process the content earlier and finally determine what needs to be played on these screens.

LED display asynchronous control system: also known as LED display offline control system or offline card, mainly used to display a variety of text, symbols, and graphics or animation. The picture display information is edited by the computer, and the memory with a framed LED display screen is pre-placed through the serial port of rs232 / 485. Then, display it and play it screen by screen.

It is characterized by simple operation, low price, and a wide range of use. The biggest feature is that the content of the display screen can be controlled according to the area, and the content is out of sync with the computer monitor. After editing on the computer, it is sent to the control card, and then the display control card. Therefore, even if the computer is turned off, the LED display can still be displayed, but the broadcast information will be limited because the storage capacity of the control card is within a certain range, which is suitable for places where real-time requirements are not high.

However, even with these differences, these screens are not superior to other screens in terms of market demand. Because both small and large enterprises rely on the LED Display Screen to better promote their business development. As a result, both LED displays are widely selected for commercial promotion and meet the indoor/outdoor display needs of all types of enterprises and industries.