What is Advantages of Elevator Advertising Solution

Elevator Advertising is a new type of advertising media, which refers to the advertising carrier produced and published on the inner walls of the elevators in urban buildings. There are many types of elevator advertisements, mainly commercial elevators, and building elevators. The main form of expression is the installation of an LCD Screen Digital Signage in the elevator car, and the other is to install the LCD Digital Display Advertising LCD Signage directly on the wall outside the elevator door.

Elevator Advertising LCD Display Media Digital Signage is an innovative Digital Signage with LCD Advertising display. It provides an LCD panel that can play images and videos for Elevator media digital signage. Use a mobile phone or computer with the network to upload the contents of the image or video. Login to the multimedia information publishing system by explorer and remote digital LCD display on the computer to upload and release advertisements unified. Adhaiwell is China wholesale supplier & manufacturer. 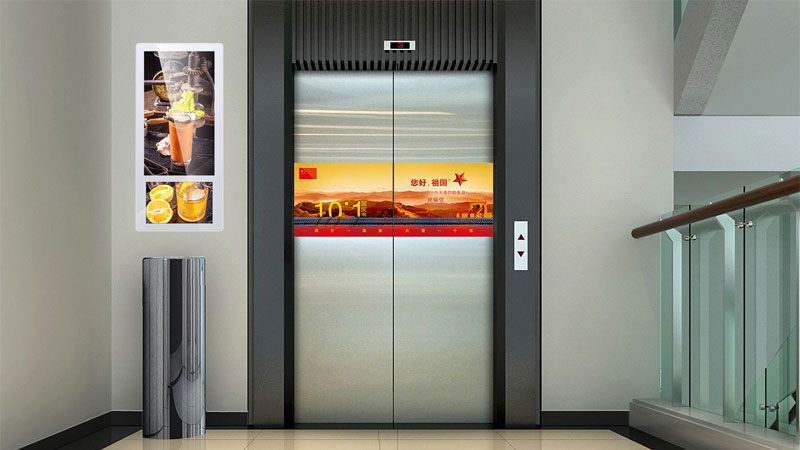 Elevator Advertising is a unique and effective high-quality new media, which refers to the special LCD Display Digital Signage advertising carrier hanging on the walls of the elevator boxes of high-rise buildings in the city. It makes good use of people’s blank psychology in the elevator. The advertising audience is less resistant to advertising information, and the audience cannot completely avoid and refuse to pay attention to the elevator. There are more TV channels, fierce competition in newspapers, the rise of the Internet, and audience diversion ( In the case of loss or loss), this non-selectivity or compulsion makes elevator advertisements have functions and values that cannot be replaced by other media advertisements.

Elevator advertising is the most important basic form of advertising media for customers to implement integrated advertising strategies. It is a window that integrates people’s lives and is easy to enter the people’s vision. It is an important portal for consumers in residential areas. The 30-day elevator advertisement release period constitutes a stable, concentrated, and long-lasting advertising information flow time and space.

Elevator LCD media digital signage advertisements close organic combination of dynamic audiences and static advertising content makes up for the shortcomings and shortcomings of the existing main advertising media and maximizes the information published in the points, lines, planes, graphics, and other aspects of the advertisement propagation effect.

2. Comprehensive and targeted functions at the audience level

Possess the comprehensiveness of the existing advertising media at the audience group level; the advertising information transmission of the urban consumer mainstream groups constructed by the residential area is highly targeted; the population, age, gender, culture, social occupation, and other consumer classes are targeted;

Facilitate the simultaneous attention of one family, several families, multiple groups, different ages, different genders, and different consumer groups; it has the functions of audience interaction, repetition, and extension; the elevator room compresses people and people The emotional distance between them; it can prompt the on-site audience to resonate with the "elevator advertisement" as quickly as possible;

Furthermore, to secure the best elevator locations for the business, consider a revenue split arrangement with the owner of the building or property manager of the building and develop interesting ways to display the advertisements.

The following advantages of elevator advertising:

In some high rises, elevator ads have become highly creative centerpieces that generate buzz through cleverness or visual appeal. From full elevator wraps to enhancements that are affixed to the building's architecture – if you can dream it, it's probably being done by the most creative elevator ad companies.

Other types of advertising don't give you much control over who sees your ad. But with elevator advertising, you can micro-target your ads by region, by neighborhood, or even by building. The ability to focus the impact of your advertising dollars has never been more promising.

The cost-effectiveness of elevator advertising is one of its primary draws for small businesses. While you could easily drop hundreds or even thousands on an untargeted newspaper ad, an elevator ad can cost as little as $30 per month, depending on the ad format and the number of locations you purchase.

Remember that newspaper ad you dropped a big coin on? That ran once before it found a new home in recycling bins across the city. Elevator ads work for you around the clock, embedding themselves deeper and deeper in your customer's buying psyches with each passing day.

Unlike other forms of advertising, elevator ads can be edited on a daily or even hourly basis. For example, LCD digital elevator displays make it possible for your company to run different ads in the morning, afternoon, or evening.

Elevator LCD advertisements have covered all corners of the city and directly target all the audiences in the city. The target groups include one family, several families, multiple groups, different ages, genders, and different consumer-oriented groups.

The number of advertising information crowds is stable, not affected by external factors such as weather and environment, and the close organic combination of dynamic and static advertising content makes up for the shortcomings and shortcomings of the existing mainstream advertising media and maximizes the use of advertising. The point, line, surface, graphics, and other aspects of information dissemination effect.

In the elevator, the environment is single, and there can only be three different brands of advertising at the same time, so that the mutual interference between brands is minimal, and it directly penetrates into people's home life. Compared with traditional media, brand publicity is more targeted.

Relevance: All the audience covered by the LCD display media are senior white-collar workers, successful people, and other urban high-income groups. There is no doubt about their potential consumption power, high level of cultural education, and great social influence. For this group of people, product promotion and brand promotion are self-evident for companies.

In addition, it is quite difficult for other forms of media to reach this consumer group in such a concentrated manner.

Compulsiveness: Usually when people are waiting for the elevator, it is the most boring and embarrassing moment, with strong and subconscious visual needs. However, buildings in prosperous urban areas are mostly high-rise buildings because of their high land prices. The elevator takes a long time to lift and lower, which increases the waiting time. On the other hand, the “Elevator Advertising” LCD display media is the only way for all passengers to enter and exit, and there have always been few materials that divert visual attention in the above-mentioned places. Therefore, once there is a novel design, bright colors, and attractive appearance Human media, its visual impact and compulsive reading will undoubtedly be quite large.

Repeatability: As the "Elevator Advertisement" LCD screen media is the only way for passengers to go up and down at least four times a day, the repeated reading of its media is so high that it is difficult for other media to look back.

Uniqueness: Indoor media, such as media in subways, media in hotels and stores, or posters, are usually of different forms, specifications, and contents. Therefore, the audience's visual dispersal is very strong, and the authenticity of memory is very low. The "Elevator Advertisement" media LCD display is just the opposite. Due to space constraints, the number of media in the elevator is scarce, and the specifications, design, and appearance are uniform. The LCD display media release content in an elevator is mostly consistent. Therefore, the uniqueness of vision and memory The exclusivity has greatly increased.

Affinity: The LCD digital signage media has a low hanging position and is limited by elevator space, so it is very close to the audience and easy to read carefully.

Decorative: All the production materials of the "Elevator Advertising" LCD screen are LG panels specially imported from Korea, which can not only integrate with the interior decoration of high-end buildings but also increase its visual content and decorative highlights. Therefore, the visual appeal of advertisements is not comparable to that of ordinary media.

Flexibility: The LCD media digital signage is convenient and quick to change or upload content on the internet.